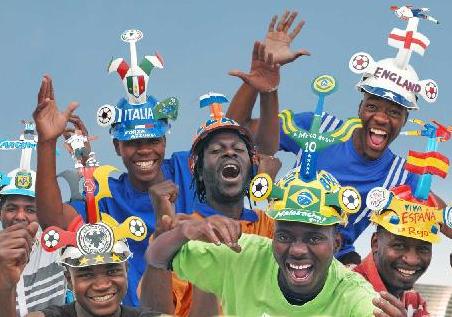 The 2010 Worldcup, event of the year in Cape Town, was really a roller coaster of emotions and ended with tears for some and high hopes for others - but in common was the high spirit, the happy atmosphere and the renewed confidence in South Africa's ability to host international events with pride and success. A well celebrated African spirit was displayed in the best way possible - We have been here and felt it. Just like the team of Makoya Makaraba you can see proudly wearing the typical Makaraba hats on this happy picture. Still want to get your hands on one of the most popular Worldcup accessoires? Then read more about these typical South African Soccer Hats here.

The South Africa World Cup 2010 was a great display of successful planing, even if South Africa's own soccer heroes did not make it after the group round. But still Bafana Bafana showed their talents and can be really proud of their performance and fair play when they left the world cup with an amazing win over the French football team. Just to follow up here I give you a rough idea about Soccer in South Africa and tell you more about the Cape Town Fan Walk and the biggest Fan Parks in Cape Town.

The Mother City has got such a friendly atmosphere, happy people, great attractions and the best soccer fans that you just will have to come and experience the special vibe in the Mother City even after South Africa World Cup 2010 in Cape Town .

The South Africa World Cup had a huge positive effect on the countrys economy as calculated so far. There were more than 373,000 foreigners visiting the country during the Worldcup and with all the expenditure taken on to improve the countries infrastructure, safety and networking facilities as well as the positive spirit during the games, the business confidence index rose to over 84 during the last month according to South Africa's Chamber of Commerce and Industry.

Soccer in South Africa is one of the most popular sports in the country. The South African children love to kick the ball and there are plenty of soccer fields and lots of football clubs here. Even in the townships, where there is restricted space and funds you will see the kids enjoy playing football matches or watching their favorite team on television.

Go to my South Africa Football A - Z with interesting facts and South African soccer lingo.

Going to see an actual soccer match in the stadium is an experience which is quite unique. The South African love to paint their faces in bright colours, wear makarabas swinging huge flags, hooting their vuvuzelas and there will be cheerful fans all around. We went to the first official soccer match played at the new Cape Town stadium in January 2010, and hey, the vibrant atmosphere at a South African soocer match is something you never will forget.

The South Africans are very proud to have hosted the FIFA Soccer Worldcup 2010 with big success in the country. Even if the South African National Soccer Team Bafana-Bafana is not one of the strongest team in the competition the Capetonians are chuffed to have won the bid to stage the world event and show the world that playing soccer is a lot of fun too. That it is more important to take part in the games than just winning! Did you see them dance even after they dropped out of the first round?! 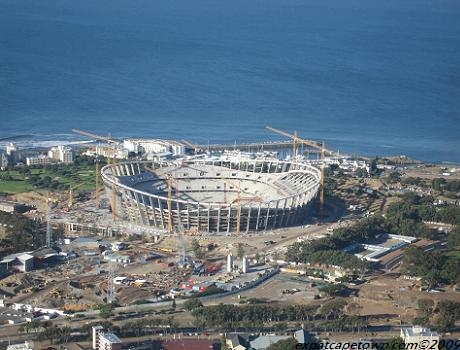 This is a picture of the construction site of the Cape Town World Cup Stadium at Green Point I have taken at Christmas Eve 2008 from Signal Hill. In December 2009 the stadium has been completed and the new Cape Town stadium is now located on the site of the old GreenPoint stadium. The new stadium was officially opened in January 2010. See how the Stadium looks like in May 2010 and read all about the events at Cape Town Stadium in 2010.

The location of this stadium is very special, being so close to the Atlantic Ocean and to the V&A Waterfront as well, with all the amenities for fans nearby. There are many new hotels and restaurants opening up in the area and this Cape Town suburb will get quite a boost with the increasing tourism too.

Although there are some voices that are talking about the massive waste of public money which could go into more affordable housing instead of the building of the stadium, nothing can help the country to get stronger as a nation in my view. The upgrade of the infrastructure being another big plus of the South Africa World Cup which should be mentioned.

Last worldcup 2006 in Germany I remember all to well, being a German expat back for a home visit at that time in Munich my hometown. The atmosphere in the German cities was quite something. There were loads of different people from many different places around the world living and partying together for the month the World Cup took place. That was a really special atmosphere. Everywhere we went we met foreigners, well soccer fans, happy ones mostly who enjoyed the great atmosphere in our German cities. In Germany for the first time the organizers had made use of massive soccer fan parks, where the soccer games were transmitted to the fans via huge television screens. And with huge I mean HUGE, like the screens you see at the big open-air concerts. These fan parks were everywhere all over the towns and cities, from the airport to the beer gardens like the one at the Mainufer in Frankfurt.

What is better than watching a good match and enjoying great food and drink and the company of other like-minded people? And now it looks like I will be lucky again, as the worldcup 2010 will be staged in Cape Town as one of the Fifa Soccer 2010 venues. I am looking forward to this great spirit once again.

The Worldcup 2010 is hosted in South Africa by the following cities: Bloemfontein/Mangaung, Cape Town, Durban, Johannesburg, Nelspruit, Port Elizabeth/Nelson Mandela Bay, Pretoria/Tshwane, Polokwane and Rustenburg. Each of the cities will not only show the matches in the official World cup stadium but also there will be huge stages at the official and secondary fan parks.

In Cape Town there are also fenced and secured fan parks being installed which conform to the Fifa World Cup Standards, i.e. where there will be no entry fee, food and beverage will be available at these parks and all the matches will be aired on big stages.

The Grand Parade in the center of town will be the official fan park for the Greenpoint Stadium matches. This area will be big enough to entertain 25,000-30,000 soccer fans during the South Africa World Cup. 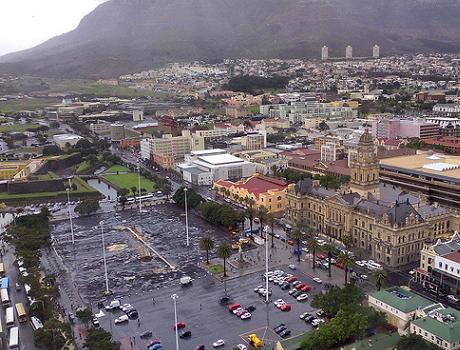 This is a stunning picture of the Grand Parade which was taken by Daniel VDMerwe at flickr. The Grand Parade which until recently last year was used for daily markets, parking and politicall rallies is now undergoing a massive upgrade for 2010. This Grand Parade is an important place in South African History, as it is here where Nelson Mandela held his first speech to the people of Cape Town after his inauguration in May 1994. Read Mandela’s speech here. To complement the official fan park, of which every city in South Africa which hosts matches has got one, there are additional secondary fan parks to be opened.

These secondary fan parks were located at:

At these secondary 2010 fan parks, the matches of the South African National Soccer Team Bafana-Bafana will be shown and all knock-out games.

If you want to stay informed and get my Cape Town Insider Tips, please bookmark this page to get updates about the South Africa World Cup 2010 and subscribe to my ExpatCapeTown Newsletter here.