What is to know about the Cape Town World Cup Fever that has hit so many Capetonians in 2010? Colorful Flags could be seen everywhere. What about this driver taking it to the next level... 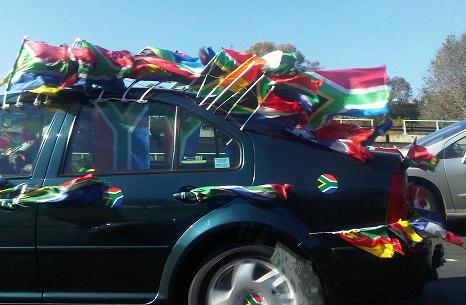 What a great feeling to be living in one of the most beautiful cities in the world and feeling the great atmosphere! During major sporting events, the vibrant Mother City feels even more lively than ever. When the next big match happens, whether an international or a local derby, simply don your makarabas (hope you still have one!) and get your vuvuzelas out (don't forget to pack earplugs for the matches!) Be sure the Mother City will become a noisy but happy party zone. Rugby and cricket matches are of course especially popular here too, but besides donning the mandatory jerseys and scarfs, there are not really any special paraphernalia - and definitely do not pack your vuvuzelas!

During the Cape Town world cup, there were four public viewing areas, where one could meet with local friends and enjoy viewing the matches on big screens. The fan jols or fan parks were located: in Bellville at the Velodrome, in Mitchells Plain at the Swartklip Sports Komplex, in Khayelitsha at the Oliver Tambo Community Hall and Athlone at the Vygieskraal Stadium. By the way, 'jol' is the Afrikaans word for party and I am sure you will hear the word more often during the any sporting event.

Starting off the World Cup celebrations in Cape Town was a big Welcome Concert on Thursday, June 10th, 2010 from 14.ooh with local and international bands like the German band Haindling which is very popular not only in Bavaria and local hot shots like Locnville. There were also lots of street festivals and fan parties all across the city. Many restaurants and bars entertained their guests and screened the WorldCup matches on huge television screens. The main party zones during the Cape Town World Cup was in the city center at the Grand Parade, the St Georges Mall and the V&A Waterfront.

As during any major event in Central Cape Town, at the V&A Waterfront or at Greenpoint Stadium, there were quite a number of road closures in Cape Town during the Soccer Worldcup and especially on days of worldcup Matches. Affected streets are usually Keizergracht, Buitenkant, Darling, Plein, Parade, Corporation, Burg, Wale, Bloem and Green. No on-street parking will be allowed during these times.

The Cape Town International Convention Center, the CTICC hosted one of the biggest indoor Worldcup Celebrations in Cape Town, a giant Football Party. The Cool Britannia music fest was one of the biggest events for soccer fans in Cape Town with live matches broadcast on giant screens and after-parties every night. Top international and local Bands and DJ's such as DJ Fresh and Roger Goode, top entertainers like Fat Boy Slim and Dizzie Rascal entertained the locals and visitors to Cape Town and there were even high-class fashion shows, various parties, concerts and international food and fanfare for all.

The event was created around the theme "soccer fever" as the teams battled their way to victory, with massive screens showing every game live and Cool Britannia hosted different national theme-days so the sights and sounds of the world could be experienced as the CTICC was transformed into a different nation every day. National days were also hosted in honour of the various countries participating in the games.

Cape Town during the World Cup and beyond

Enjoy living in Cape Town, all the other great attractions and events in Mother City.