Or the new "Cape Town Stadium" in Green Point

Are you looking for info on the new Green Point Stadium? The new Stadium in Cape Town was officially named "Cape Town Stadium" in October 2009.

Now that the World Cup matches 2010 are coming closer and closer and the matches for the Group Stage in Cape Town Stadium are confirmed, you will surely want to know more about the newly built Stadium in Cape Town. 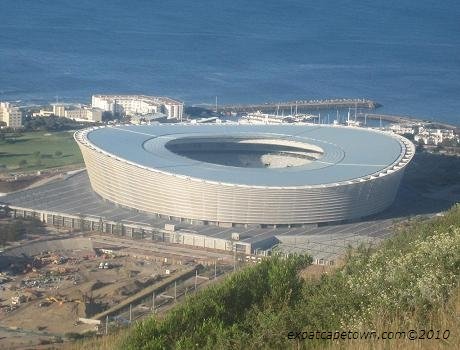 On this photo, which was taken on Signal Hill in December 2009, you can see the splendid location of the Green Point Stadium. The stadium is located in Green Point, a Cape Town suburb which is close to the V&A Waterfront but also only a short walk to Cape Town’s City Centre.

The 1.8km long scenic Cape Town Fan Walk will connect the Cape Town Stadium to the Grand Parade in the City Centre.

Cape Town’s Green Point Stadium is located in a safe suburb with many accommodation options and lively restaurant scene and offers many activities for the whole family.

The stadium lies close to the Atlantic Ocean with its famous seaside board walk which connects Granger Bay to Sea Point.

My family and I were lucky to attend the Grand Opening of the new Cape Town Stadium, which was well organised and the festivities went on very peacefully.

Pictures from this big event in Cape Town Stadium

The new stadium will also host the Cape Town Rugby Festival which is incorporated in the Cape Town Tens Tournament in February this year.

On February, 6, 2010 up to 40,000 there were rugby fans celebrating the new stadium with a ten-a-side match between "The Stormers" and "Boland" and a match between the "SA Legends" versus the "International Legends".

Tickets for the Worldcup Matches are available from FIFA through registration on their website.

During the Tickets Phases three to five you are still able with a bit of luck ;) to secure some tickets for the Green Point Stadium Matches.

If however you are not so lucky to get tickets for the popular Cape Town matches in the stadium in Greenpoint, you can always find you way to the Cape Town Fan Mile in the City Centre.

The public viewing area of the Worldcup 2010 will be held on the Grand Parade in the Cape Town City Centre.

The huge Fan Fest is expected to be attended by many soccer fans from all around the world. More than 20,000 fans can be accommodated in Cape Town’s pedestrian mall the "Grand Parade".

This Cape Town Fan Zone will be open from 10am to midnight and fans will be able to watch the 2010 matches on huge screens. Entrance to the Fan Mile is free and there will be additional entertainment for the fans.

Then there are the other official fan parks in Cape Town at the Bellville Velodrome, the Athlone Stadium and the Swartklip Sports Complex.

More info on the Worldcup 2010 in Cape Town

Public Transport to the Greenpoint Stadium

Special Transport Options will be available in 2010. The newly constructed Bus Rapid Transport System (BRT) which be operating by June 2010 and will connect some central suburbs with the Cape Town Stadium.

If you want to use the taxis in Cape Town as a foreigner, please be advised only to choose reliable companies who have taxis with meters. The standard fare is currently R10 per km, but the prices are likely to shoot up during the World Cup in 2010 in the Mother City.